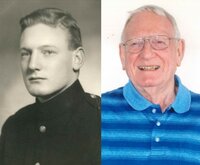 LCdr (Retired) BSc (RMC) LLB (Queen’s) CDIt is with profound sadness that the family announces the passing of David at KGH with his family by his side on May 3, 2021 in his 84th year. Beloved husband of 61 years of Clare, devoted father to Stephen (Denise) of Guelph and cherished Grandpa to Nicholas (Camille) of Kingston, Sarah of Peterborough, Alexandra of Orillia and Macayla (Brandon) of Guelph. Predeceased by his parents, Vice-Admiral Herbert and Mrs. Betty Rayner, his infant son, Timothy, his son, Christopher (Sharon) and his younger brother, Michael (Susan) of Ottawa. Surviving David are his siblings: John (Ann), Phoebe (David Gowdy), Janet (Bob Whillams), all of Ottawa and Catherine (Bruce Ripley) of Kimberley, BC. After graduating from RMC, (proud member of the class of ’59), David joined the Royal Canadian Navy and served at sea on both coasts of Canada. Returning to Halifax, he taught for three years at HMCS Stadacona. In 1967, David resigned from the RCN to pursue a new career. The family moved to Kingston and David enrolled in the Queen’s Faulty of Law. During the ensuing 50 years, David lived a full life. He practiced law for more than 25 years and he was also a former master of Queen’s Lodge #578. He was President of the Church Athletic League and executive member of the Voyageurs hockey club. He spent many years offering advice and service to Legal Aid and the Youth Diversion Program. A quiet unassuming man, David was a constant source of support and love to his family friends and his beloved Montreal Canadians. His memory will be cherished forever. The family would like to thank Dr. A. Sanfilipo for his devoted care of David over the years of his illness and to the doctors and nurses on Davies 3 as well as the CSU for their exemplary care during David’s final hospitalization. If desired, memorial donations can be made to the Heart and Stroke Foundation or the charity of your choice. A private family burial was held on May 7th, 2021 at Cataraqui Cemetery. A celebration of life will be held as soon as possible. Arrangements entrusted to CATARAQUI CEMETERY AND FUNERAL SERVICES.