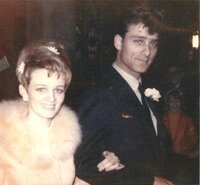 TAYLOR, Brenda Roberta (nee Murphy) – It is with heavy hearts that Sheri Badalato (Rob) and John Taylor (Kelly Best), relay the news of their mother’s passing, on Nov. 11, 2021, at Extendicare, Kingston in her 77th year. She exited peacefully in the end, knowing that she was loved immensely. A true angel now has her wings. Throughout her years of illness, she remained her kind, gentle self with eyes that lit up when she saw her family or anyone that she knew. Brenda was predeceased by her husband, Jim (2007), and her parents, Mary and Russell Murphy. She was the older sister of Carl and Bill Murphy. She will be missed very much, by her grandchildren, Chase, Nic, Dylan, Ella, Addy and Katie. She had a genuine compassion for all people that she demonstrated through her gifts of integrity, empathy, sincerity and generosity. These traits were evident in her nursing career of 35+ years in Kingston, as a RPN, mainly at Rideaucrest. Brenda was born on Cape Breton Island, NS into a military family. She settled in Kingston after attending Notre Dame HS and making numerous great memories at nursing school at the former KPH. The family wishes to thank Extendicare Kingston staff, notably on the South Wing, especially Tracey, Michelle, Elaine, CJ, Ed, Nanette, Ravi and Dr. Jeff DiTomasso; the Conservatory Pond Staff; KHSC – C3 and C9 Staff; Dr. Veronica Mohr, Dr. Joanna Willms and the Willow FHT; Dr. Melissa Andrew , nurses Nancy Timan and Kelly Garrett of PCH; Pat Compeau, Sandra Grass, Ione & Jim Davidson, Joanne & Dale Best, Theresa James, Sharon McIlroy, Pauline & Harry Tugwood, Shirley Hart, Kelly Andrews, Shelly Vieria and Linda Duffy. Brenda has been cremated, as per her wishes. A private graveside service will be held at a later date, where she will be placed beside her husband, at Cataraqui Cemetery. In lieu of flowers and in honour of Brenda, please consciously do something kind for someone or donate in memory of Brenda to the “Pete” Petersen Basketball League. Arrangements entrusted to CATARAQUI CEMETERY AND FUNERAL SERVICES.