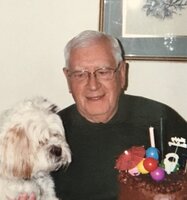 Reginald ‘Reg’ Clive Philp, was born October 30th, 1928 in Montreal, Quebec to Frederick and Laura May (Perkins) Philp of Truro, Cornwall, England. He was one of ten siblings in a bustling family living in Greenfield Park, Quebec.He is survived by his wife and best friend of 64 years Violet (Betsy) Philp, his children Allan (Heather), Jack, Lorena (Jacques), Jeff (Kim) and Cheryl. Grandfather to Kym (Matt), Andrew (Selina), Erin, Joshua, Rebecca and Jessica. Great grandfather to Alexia, Zoey, Emily, Sarah, Stephanie and Jack.Reg had many careers in his younger days working as a delivery boy for ice cut from the St. Lawrence River, golf caddy, assistant at a suit company where he worked under the name Gus as a joke. He then chose a career as a foreman at Pratt and Whitney Canada where he proudly worked for over 30 years. At Pratt he made lifelong friends and would regale people with the adventures that happened there. This is also where Reg would develop a very enthusiastic and colourful Frenglish language.Upon retirement Reg relocated with Violet to Kingston, Ontario where they would spend over 30 years together. In Kingston Reg was able to spend more time with his family as well as create a garden that was his pride and joy.Reg will be greatly missed by family and friends. Anyone who met him got to experience his positive, friendly and mischievous nature. He was always quick with a joke and a smile, even quicker with support and kindness.He proved to be a natural with technology and thanks to the magic of his beloved iPad he was able to connect with his family across the world. He loved sharing the successes of his children and grandchildren with everyone.Reg was happiest when spending time with Violet – as he often said – they are night and day in personality but agree on all the important things which is what mattered most.Due to current situations, no funeral service will be held. A celebration of life will take place at a later date. In lieu of flowers, expressions of sympathy donations can be made to University Hospitals Kingston Foundation https://uhkf.ca/Home. Arrangements entrusted to CATARAQUI CEMETERY AND FUNERAL SERVICES.