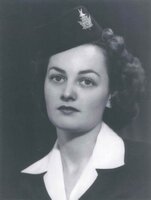 CROWE, JEAN It is with profound sadness we announce the passing of Jean Crowe at the Helen Henderson Care Centre in the 96th year. The matriarchal leader of the Crowe clan was born in Stratford Ontario. Mom became a stewardess with TCA after graduating from the nursing program at Toronto General Hospital and was recognized as one of Canada’s most marriageable girls in 1948. Her hospital career as a nurse began in Cobourg and eventually saw her move to Kingston and the emergency department at KGH as the head triage nurse. A career change later in life saw mom become a real estate professional. Predeceased by her husband Bill (1999), brothers Winfield and Ken and is survived by children Cathy, Bill (Lynn), David, Doug (Elena) and her nephew Winfield Jr who she treated as her 4th son. Mom was a very proud grandmother to Idella (Kevin), Jeff, Leslie (Sean), Jessica, Alexa, Jacob, Benjamin and great grandmother to Leroy, Rosario, Augustus, Sienna, Zackary. She very much enjoyed her time spent swimming at the Helen Henderson Recreation Facility and spending time with her beloved bulldogs Bo and Cassius. “Vanish o night fade you stars at dawn I will win”. Cremation has taken place. Arrangements entrusted to CATARAQUI CEMETERY AND FUNERAL SERVICES. A celebration of life will be held at a later date. Thanks to all the staff at Helen Henderson in particular the PSW’s and Dr. Vasquez. In lieu of flowers donations to the Kingston Humane Society would be appreciated. Arrangements entrusted to CATARAQUI CEMETERY AND FUNERAL SERVICES.