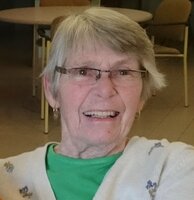 I see you in the backyard mum, a coffee—and your crossword done sun filtering through the trumpet vines the rumbling 2’oclock’s on time. Your weekly letters landing, there when I get home. the postmark from Toronto, takes me with you to the dome. the crack and pause of a pop-fly hit— the swelling sound at the first base miss the runner’s safe and you lean in— I want to remember you just like this.Barb died peacefully on 4 April 2020 at the age of 81, at Providence Manor in Kingston, following a brave 10 year battle with Alzheimer’s disease.Barb was a very remarkable woman who will be missed by everyone who knew her. In giving of herself she touched so many lives - Her laughter, her smile, her ability to just know when something was on a mind, an ear to listen and a hug to reassure. Her empathy, acceptance, ability to build and give trust, was taken to action everyday - with her family, her friends, her students and her patients.She was the beloved wife of Nick Diamant, sister to Gord [Dawn], adored mother of Stephanie [Phil], Jodi, Daphne [Derek] and Andrea [James] and foster mother to Joel and Lonnie. Devoted daughter-in-law to [the late] Sophia Diamant (Yia-Yia), and sister-in-law to Peter [Ruth]. Fantastic grandmother to Nicholas [Janaki], André [Rachael] and Loucas [Meghan] and great-grandmother to Felix. Adored aunt and cousin to many in the Mylks, Diamant, Bethune, Koniaris, Porikos and Pernokis families.Born in Owen Sound, Barb grew up in Kingston and first met her loving husband, Nicholas, when they were little children. Their long-term relationship blossomed when Nick moved to Kingston to study Medicine at Queen’s University and Barb entered nursing at Kingston General Hospital. They married shortly after and initiated a 62 year-long journey together, which resulted in a wonderful family and network of friends, spanned multiple cities, fulfilling careers and adventures around the world.The family eventually settled in Toronto and had a working farm near Shelburne that was a major part of their lives for almost 40 years. Weekends and summers on the farm were greatly influenced by Barb’s abilities and caring, including the special relationships developed with neighbours.Even with a busy household of children and two homes, Barb completed her nursing training and graduated from Ryerson University, followed by a diploma in Gerontology from the University of Toronto. She taught PSWs and RPNs, while also working as a care worker, primarily at long term care facilities. This led to meaningful interactions with not only students and patients but with all her coworkers, and their love and respect for her was continually evident. In an amazing twist of fate, her work at a Toronto cancer clinic led to the chance discovery of “long lost” family members - her dear Aunt Jean and husband Jim.Barb had an exceptional ability to adjust to the world around her and to changing circumstances, to create a centre of calm, to develop her own wonderful career, and to spread her caring, passionate and sensitive personality and brilliance to all her contacts and experiences. She was an avid gardener and a fabulous cook – never afraid to experiment. She had a deep love and connection to all living things, embracing the menagerie of pets her daughters and husband brought home through the years. As a hardcore Blue Jays fan, she enjoyed spring training in Florida and ball games in Toronto with her husband.Creative and smart, she shared her love of books and learning—deploying her mastery of words and wit to great effect in Scrabble and the papers’ daily crosswords. A gifted writer and diarist, she sent weekly letters to her daughters and distant friends. Every week a mention of a ballgame, the sun coming through the window, a flower, a book read, a new recipe clipping. Although she always supported everyone in finding their way, some far away, she was ever present, letting everyone know they were always with her and she with them on their journeys.A special thank you to the supportive neighbours of Portsmouth Village who provided Barb and family the most loving community over the past 10 years.Barb’s family wish to express their deepest appreciation to the incredible team at Providence Manor, including the heroes on Montreal 5 who provided her the warmest of care from beginning to end. A grateful thank you to her personal carers, especially Lisa, who treated her with selfless kindness, care and compassion, filling so many of her days with joy and happiness, initially at home and then at Providence Manor.A Celebration of Life will be held later in the spring or summer.In lieu of flowers, donations in Barb’s memory can be made to the Alzheimer Society of KFL&A or to Providence Manor through the Kingston General Hospital Foundation. Arrangements entrusted to CATARAQUI CEMETERY AND FUNERAL SERVICES.