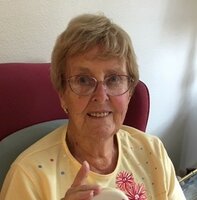 Passed away peacefully at Kingston Health Sciences Centre on September 18, 2020 after a courageous battle with cancer. Predeceased by her husband Ted, and her parents Richard and Dorothy. Survived by her children Susan (Kathy McCormack) and Dave (Angela) Reynolds. Sister of Barbara (Doug) Arniel, Pat (late Doug) Anderson and the late John (Fennie) Loye, as well as sister-in-law of Carol (late Mort) Pedersen, Liz Nagle and the late Bill Reynolds. She will be dearly missed by her nieces and nephews.Shirley was an avid baseball fan and player, and enjoyed being the President of The Church Athletic League for many years. She was a devoted employee at Empire Life retiring after 40 years. In keeping with Shirley’s wishes, cremation has taken place and a service will be held in the spring. In lieu of flowers, donations to a charity of your choice would be appreciated by the family. Arrangements entrusted to CATARAQUI CEMETERY AND FUNERAL SERVICES.