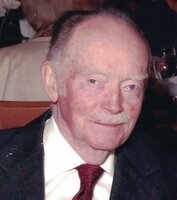 Peacefully at Trillium Retirement and Care Community. Predeceased by Isobel, his wife of 67 years, David is survived by his sons, Brian Geoffrey Lewis and Roger David Lewis; his daughter-in-law, Marguerite (nee Shand) Lewis; his grandson, Simon Peter Lewis; and his granddaughter, Anna Rebecca Lewis.A proud World War II veteran, David fought in Burma and served in India and Japan following the war. A graduate of the University of Liverpool, he worked as an architect in Kenya, Ethiopia, Lebanon, Syria, and Washington, D.C. Much of his career was devoted to international development operations with the United Nations in the Middle East and with the World Bank in Washington. After retiring, David moved with Isobel to Kingston in 1998. There, he kept a close eye on world affairs and his investments and enjoyed walking, photography, and frequent visits from family, including his grandchildren, who knew him as a generous and loving “Grandpa”.The family wishes to thank Aggie, Wanda, and Cheryl from Heart to Heart Seniors Services for the exceptional care and friendship provided to David over the past three and a half years. Their regular visits brightened his days. A celebration in memory of David’s life will be held at a later date. Arrangements entrusted to CATARAQUI CEMETERY AND FUNERAL SERVICES.