The Beginning of a Historic Garden Cemetery

“… a beautiful spot of seventy acres has been purchased… we feel assured that a spot better adapted for a Cemetery could not have been selected, and we rejoice that at last a rural Cemetery is established; and we think… the availableness of the entire ground for purposes of interment or the beauty of the surrounding scenery, that the Cataraqui cemetery will soon compare favourably with other Cemeteries on this continent. ” An editorial in the Daily British Whig (Kingston) of June 2nd, 1853. 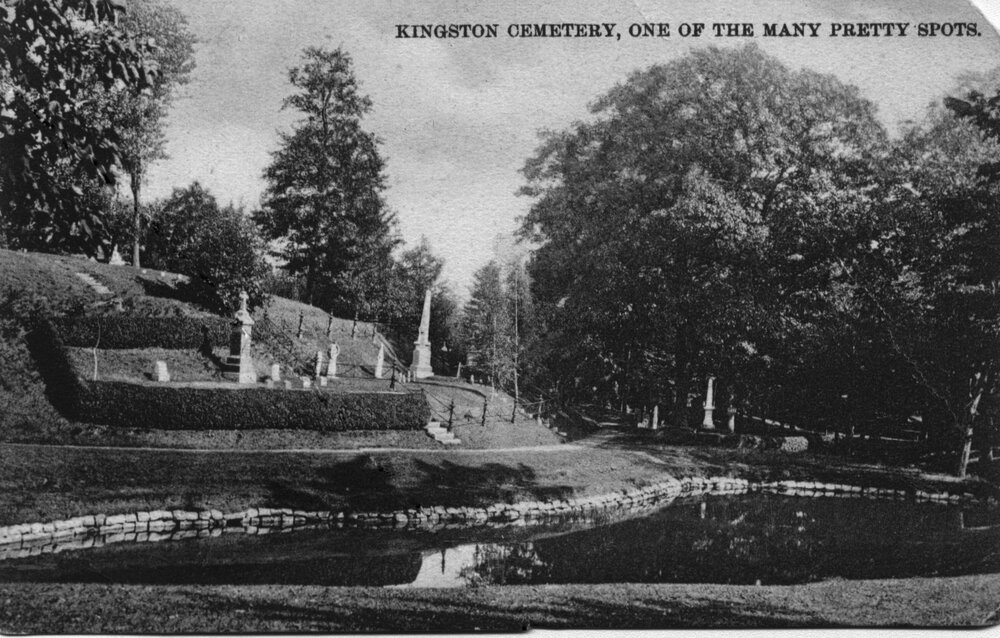 Kingston of the early 1830s and 1840s had quickly expanded from its earlier United Empire Loyalist roots. With the completion of the Rideau Canal and the local military fortifications, immigration to the area had begun to increase.  The Town of Kingston began experiencing firsthand the qualities of many of the larger North American towns and cities as new ideas and wealth flowed into the town.   Kingston’s growth was directly linked to the increase of goods and immigrants that entered her port after traveling up the St. Lawrence River from Montreal and abroad.  As the city began to grow, inner-city burial locations became fewer.   Unknowingly, the boom in Kingston would bring the unwanted presence of deadly diseases.  Cholera and typhus would take hold on the shores of Lake Ontario as epidemics.  Ships loaded with the families of Irish, Scottish, and English immigrants would sail into the port of Kingston carrying a hidden deadly cargo within the cramped and poor conditions.  At a time when Kingston’s small churchyards and burying grounds could barely find room for town citizens, the large number of dead and dying immigrants posed a crisis.  As a result of the panic that ensued, mass graves of Irish Immigrants were dug on the Kingston waterfront.

Disease and fear began to spread quickly to Kingston’s citizens.  It was believed that the buried dead would spout deadly gases and fumes causing others to become ill and die.  The citizens no longer wanted burials within the town limits.  Town leaders had to act.  A call went out for the closure of the city burial grounds and the creation of a new cemetery beyond the town limits.

Immigration had brought some old-world attitudes among the lower classes.  However, it was the new ideas and attitudes among the educated and merchant classes and of those immigrants that realized that religious and ethnic tolerance was the key to success and opportunity in a new land.  More and more citizens became discontent with the old world attitudes and the sectarian policies of the old church-run burial grounds.  The Romantic Movement that was taking hold among their American cousins also influenced political and social life in early Kingston.  The answer to the city’s burial concerns came from a group that would work together to create a new cemetery that was not influenced by the church or municipal politics.  Created out of necessity and changing social attitudes The Cataraqui Cemetery Company was born.  It was a unique corporation tasked to create a cemetery that was fundamentally very different than anything before it;  a not-for-profit, non-denominational, rural reform public garden cemetery.

The Cataraqui Cemetery Company began with incorporation on August 10th, 1850 by a special Act of the Legislative Assembly of the Province of Canada.  Sir Alexander Campbell (later to become a Father of Confederation and former law partner of Sir John A. Macdonald) held the position as the first President of The Cataraqui Cemetery Company's Board of Trustees.  Shares were first sold to raise the capital needed to purchase 70 acres of land in Waterloo Village (later known as Cataraqui Village, a part of Kingston) and to lay out the cemetery's grounds.  Once enough shares and capital were raised, the company issued a call on its shares and the shareholders could exchange their share for equivalent burial lots (now properly called interment rights).  Families then came to select their plots from the selectively cleared area. 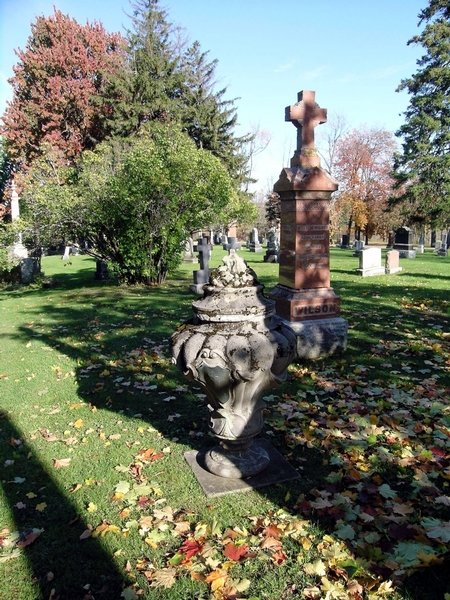 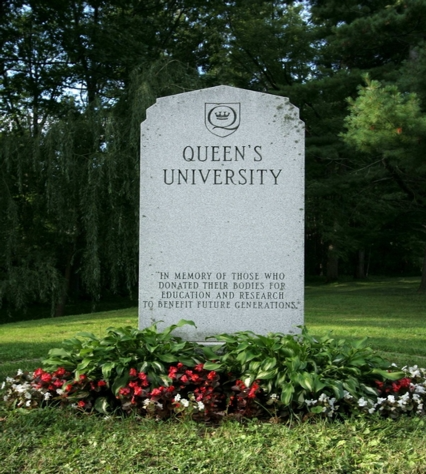 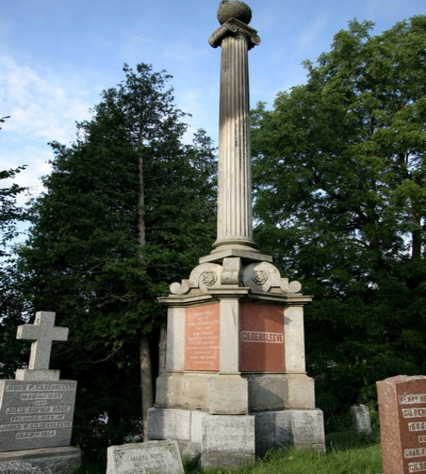 As a reform cemetery, Cataraqui was (and remains) administered collectively by a Board of Trustees who are elected from among the cemetery's patrons and interment rights holders (members of the corporation).  A member is any person that purchased interment rights to a lot within the cemetery and is recorded as such on the official certificate of interment rights and the cemetery's register of rights holders.  It is important to note that to this day, any person who has or will purchase interment rights at Cataraqui Cemetery becomes a "non-capital shareholder" or  "member" of a historic cemetery which includes as part of its membership two Fathers of Confederation and several other historically prominent Kingston men and women. We continue to this day as a not-for-profit, nondenominational, reform cemetery of the rural garden style.

It was agreed that the Cemetery would be influenced and built to the standards of the emerging rural (garden) concepts of cemeteries.  Examples include the  American/British/French cemeteries of Mount Auburn in Boston Massachusetts, Kensal Green in London England, and the inspiration for all, Pere Lachaise in Paris France.  Cataraqui Cemetery, with direct links to these forerunner cemeteries, was one of only two or three of the first generation of its kind in Canada.  Cataraqui Cemetery's American designer, Fredrick Cornell, was particularly influenced by Mount Auburn in Boston, Mount Hope in Rochester NY, and the growing Romantic Movement in America. 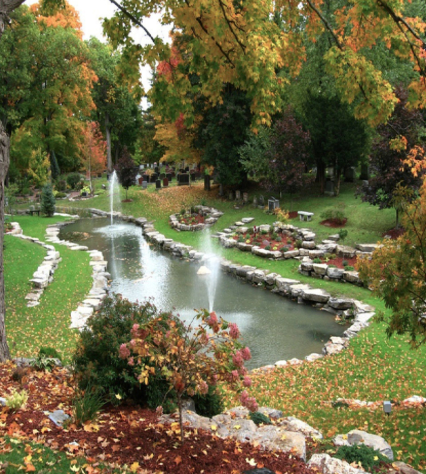 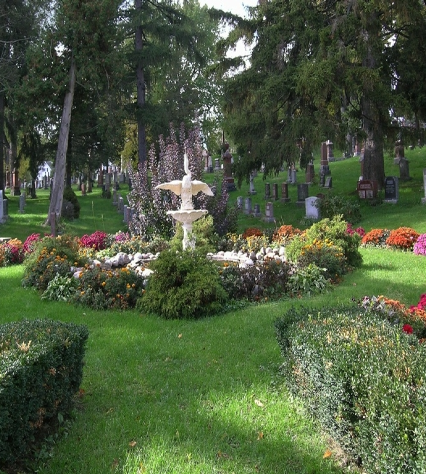 The rural cemetery style is more than just a cemetery located outside of an urban centre's limits.  The rural style denotes and embraces the pastoral elements of the local environment, surrounding natural terrain, and physical features.  All of which are enhanced with natural and artistic forms to create a Picturesque landscape and setting.  The design of the cemetery is planned using the Picturesque style of painting, to be organic and flowing as opposed to the rigid geometric block concept that cities were using for their urban planning.  Winding roads were laid out using the contours of the hilly terrain.  Scenic and flowing watercourses and ponds were retained.  Verdant vistas and Picturesque viewscapes were enhanced by the large mature trees in the background, the selective placing of ornamental plantings in the park-like mid-ground, and the crafted monuments and allegorical statuary in the foreground.  Just like a Picturesque painting,  Cataraqui Cemetery embraced the uniqueness of its chosen setting and life-affirming environment.

Rural-style cemeteries are the forerunner of open spaces that led to the North American movement creating public parks. Cataraqui Cemetery served in this capacity for several years.  Predating Kingston's earliest parks, including well-known City Park, Cataraqui was host to many weekend visitors.  At one time, visitors became so numerous that an off-duty constable was hired to control the crowds and specific by-laws were passed to prevent visitors from swimming in the ponds,  no picking flowers, no dogs, and no racing horses on the cemetery avenues.  Signs were even posted asking visitors to not molest (shoot) the squirrels. The Cemetery even went so far as to introduce a mating pair of black squirrels to the cemetery.  To this day Cataraqui remains a valuable open space for visitors seeking a park-like atmosphere.  Joggers, walkers, winter cross country skiers, year-round hikers, artists, photographers, and bird watchers all take in the sights while paying respect to the dead interred within.