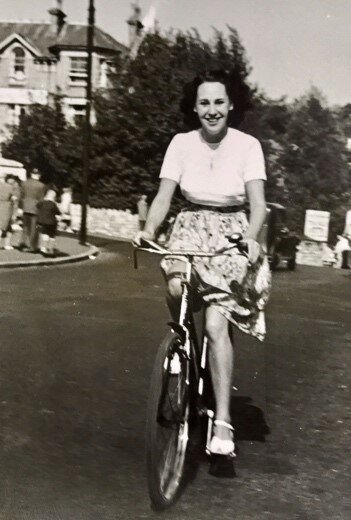 We are very sad to announce the passing of Doreen Olive Keele (nee Guy) on 26 March 2022.  Predeceased by her husband Robert Conway Keele and son Robert (Bob) Conway Jr, she is mourned by Ainsley (Mark), Guy (Margo), Howard (Lynda), Philip, Andrea (John) as well as her five grandchildren, their spouses, and her four great-grandchildren.  Doreen was an amazing wife, mother and grandmother who was committed to her family. An adventurous young woman, she emigrated from the UK to Canada after WW 2 to work at the Kingston General Hospital as a secretary; having lined up the position before leaving her home. She met her husband Robert a few years later when he was visiting family in Kingston, while on two weeks leave from the Royal Canadian Air Force. After a whirlwind romance they eloped on the afternoon of New Year’s Eve 1949. From then on, she took on the important role of supporting her husband in the military, raising six children, and managing their regular moves across the country, until his retirement. She, Robert, and the family eventually settled in Kingston, Ontario. When her husband passed, her son Bob moved into the family home and lovingly cared for her. With her son Bob’s unexpected passing in 2018, Doreen eventually moved to the Perley and Rideau Veterans Home (Perley Health) in Ottawa where she could be closer to family. We are so grateful for the care she received at Perley Health. Wonderful staff and programs augmented by regular visits from her son Guy and his wife Margo brought much enjoyment to her later years, as did Facetime calls with family across the country. From the Perley’s musical concerts to pub days, from sitting by the duck pond to her favourite - ‘ice cream day’ - she had a lot of fun and a lot of laughter. Certainly, challenges brought about by the COVID pandemic in recent years were stressful for all concerned and access limited. Thank you to all the staff at the Perley, especially to those in Ottawa 2 West for the tremendous care she received during this time (and Rideau 1 South earlier on). We are also so very grateful to Margo, Guy’s wife for her loving care while resident visitations were restricted. We are, of course, heartbroken but at the same time we take consolation in, and celebrate, a life well lived. It is also comforting to know she is once again with her husband Robert and her son Bob (though we are not sure how happy Bob is about mom’s arrival as, no doubt, it will cut into his and dad’s golf games).